Start from the beginning

That was how my first therapy session started. I was seated across from the psychiatrist struggling with where to start. How do you lay your life bare in front of a stranger? Tell them about thoughts that you haven’t even been able to acknowledge, let alone speak out loud? I struggled for a while as she waited patiently. I fidgeted with a piece of loose string on my lap. I shifted in my seat. All the while trying at all cost to avoid eye-contact. Eventually, all I could manage to give was I don’t know where to start.

Start from the beginning.

And that’s what stuck. Out of everything the psychiatrist said during that first session, that was the one thing that stuck with me. It felt like a gentle nudge. Like someone saying, it’s ok. This is a safe space. I remember feeling somewhat cathartic admitting the things that I hadn’t had the strength to accept in a long time because I simply did not feel entitled to those feelings. I had a home; I was surrounded by people who love me and supported me. What business did I have feeling hopeless? Why did I always feel like I was drowning when there was nothing to drown in? But, as I continued to talk, I started to see a pattern form. All of a sudden, I was digging up things that I had buried in a dark pit at the back of my mind. I was making may way to the root of the problem.

The session ended in a diagnosis. Depression and anxiety. A hard pill to swallow but even harder when I realized that I was one of the lucky few who have access to mental health care. Access to a chance to get better. You see Kenya is in a crisis when it comes to mental health. According to Mental360, Kenya has 79 working psychiatrists. That means that every psychiatrist is expected to serves 500,000 people. Awareness is extremely low with only 10% of the population seeking assistance. Additionally, with suicide being the second leading cause of deaths amongst the youth (there has been a 58% increase in suicides in the last decade), it is baffling that 70-80% of people struggling with mental health issues get ineffective treatment or no treatment at all. While a significant percentage of the Kenyan youth continue to struggle with issues of mental health, a large number of them don’t have access to the help they need.

That is why the work collectives such as Mental360 and Headspace 254 are doing is so essential. We had a chat with Jason and Mercy, the brains behind Headspace 254 on their upcoming collaboration with Mental 360, the Cradle Arts Festival.

Jason: It is an awareness and advocacy foundation started by members of the creative community in Kenya to provide safe spaces physically and online for, originally, Kenyan creatives but now it has become much broader than that. What we are calling ourselves now is creative activists smashing stigma by taking the mental health conversation mainstream. We’ve got a broad community of creatives that we can tap into to actually affect tangible change in the way we talk about mental health because mental health is taboo. You can’t really talk about it. If someone is mentally unwell, we hide them in a dark room somewhere. People don’t understand the difference between mental health and mental illness. When you say mental health, people think of that guy walking down the road covered in plastic, shouting at everyone. Part of the description of mental health by the WHO is the ability to cope everyday stresses of life. For example, how well do you cope with being cut off by a matatu in traffic? Do you rant and rave? Does your blood boil? See, that’s not healthy. That’s not coping with everyday stresses of life. So, what we’re doing now is really trying to create an environment where people struggling with mental health issues can talk about it very easily without shame, without guilt and without fear. Also, for the people who are listening to be able to respond, to know what to say, to deal with the conversation. Ideally, we get to a point where the whole of Kenya can talk about depression, anxiety, addiction… without the stigma.

Mookh: What inspired the name?

Jason: Well, we were sitting around with a few creative guys wondering what to call the bloody thing and thousands of ideas came up but they were all boring. Names like brainstorm and mind space and mind works, they all sounded like boring research companies. Then one of the creatives said, I haven’t got the headspace for this, I’m not in a good place at the moment. And that word, headspace, just stuck. It was just right because that’s what we are trying to create. We are trying to create a safe space. We are trying to declutter people’s minds when it comes to mental health. We are trying to give creatives an environment to be able to operate smoothly. calmly and peacefully. So, it just fell out of someone’s mouth during conversation and everyone said yeah, that’s it.

Mookh: The increase of mental health issues and the lack of access to mental health care are major issues in Kenya. How is Headspace 254 working to change that?

Mercy: We do this through events as well. We’ve had several events where we’ve invited people to talk about issues like suicide and work/life balance. We create spaces where people can talk about these things and create that awareness. We invite experts who can give expert opinions. We, also, invite people who have gone through it so they can share their personal experiences.

Mookh: These are conversations that people aren’t necessarily having as often as they should and you guys are championing for people to have these conversations more often.

Jason: Yeah, it’s really interesting going into workplaces and realizing that it’s something no one has ever talked about before and they want to start talking about. We’ve been to a couple of advertising agencies and the lack of knowledge and understanding around mental health is huge. I think right now, in Kenya, people are starting to talk about it a lot more and that’s fantastic. We are also working really closely with Senator Kasanga who’s pushing reforms to the mental health act in parliament. So, we are doing everything that we can to support. Her ideal is to put a mental health professional in every healthcare facility in Kenya because at the moment there is around 79 psychiatrists in the whole of Kenya. That's ridiculous! What we can do as Headspace 254 and the creative community is get the whole country behind the conversation which puts pressure on the government to channel funds towards and prioritize mental health within the universal healthcare act.

“Cradle Arts Festival is a one-day creative spectacular that aims to challenge the social stigma surrounding mental illness and decrease the discrimination faced by those affected by it. From art exhibitions to empowering personal stories, and thought-provoking arts performances, Cradle Arts will use Art to foster a spirit of compassion and acceptance; with the understanding that we all have personal stories and that having a mental illness does not make us any less of a human being.” -Headspace 254 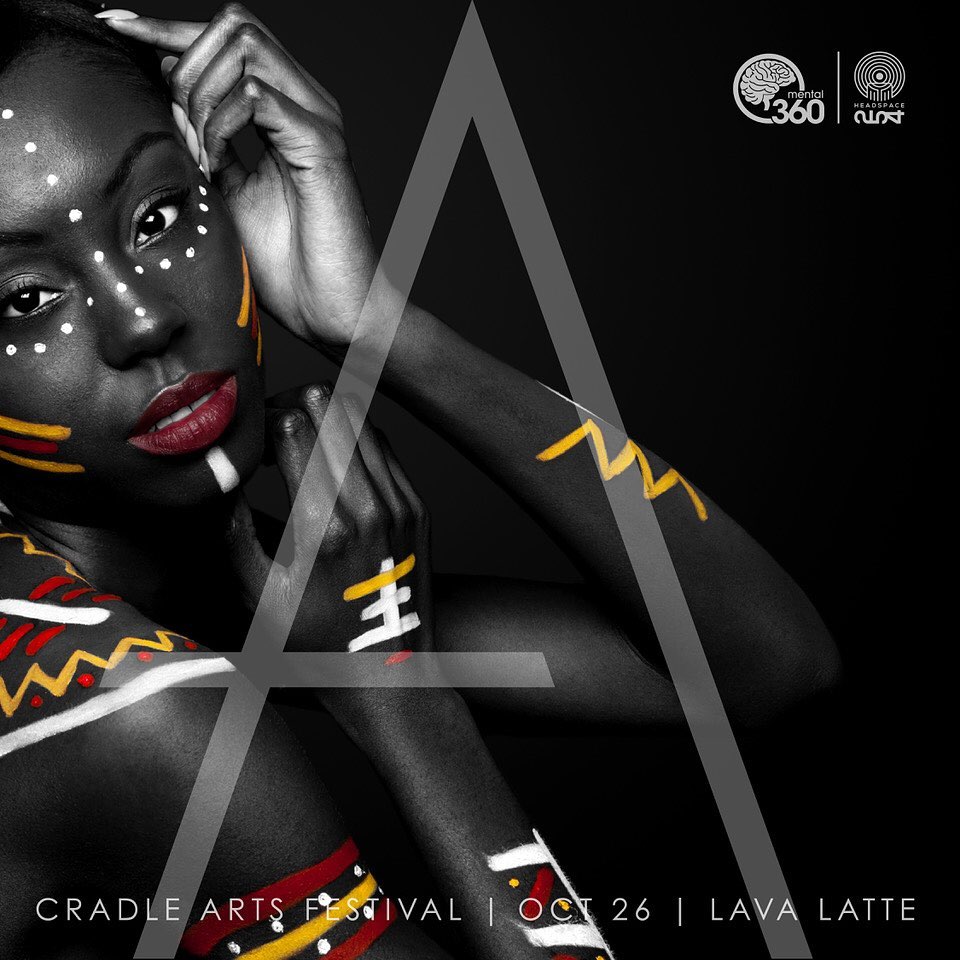 Mookh: Tell us a little about Cradle Arts.

Jason: We are really wanting to galvanize the creative community into a movement to take the mental health message mainstream; not to make it cool but make it accessible and to talk about in interesting and creative ways. That’s where the art comes in; art, music, poetry dance and film. We can use all these amazing tools that artists provide us with to get the message out there in an interesting way. It’s good for the artists as well because they are able to express their own pain and their own struggle through their art and that’s very cathartic. Human beings, particularly in Africa, are natural born story tellers. I don’t want to learn about anxiety, depression, bipolar disorder, addiction, and any other mood disorder in a board room or in a doctor’s office that’s full of dust while using big words. The best way to communicate anything is through a story and we can tell stories through art and dance and poetry and music and film, stories that people can relate to. That’s really the best way to smash stigma and artists, I feel, are the best equipped to tell these stories.

Mookh: You are working with a variety of artists for Cradle Arts. Have these artists had any personal experiences with mental health issues?

Jason: If you talk to most artists, they will have some sort of story to tell about the human condition. It may not be about a specific mood disorder or illness but artists tend to have a consciousness or a heightened sense of awareness about humanity that the rest of society doesn’t have. That said, some of the artists have struggled. They’ve had their own battles and some of them may even talk about them. It’ll be a very intimate occasion. It’s not a grand stand, spectacular, rock ‘n’ roll festival. It’s an intimate up close and personal way for people to communicate their own personal stories and their own points of view on life and the human condition.

Mookh: What do you hope to achieve with Cradle Arts?

Jason: To create awareness. To smash stigma. To provide solutions.

Mercy: So that people know the resources available to them and they know where to go if they are struggling with a mental health issue or they know someone who is struggling.

Mookh: What can we expect in the first edition of Cradle Arts in three words?

Featuring performances by the likes of Collo, Mugambi and Taio, the Cradle Arts Festival will be happening at Lava Latte on the 26th of October from 10 am to 7 pm. This is not one to be missed! Get your tickets here.

Follow Us
Categories
Latest Content
All Eyes On Nyashinski As Fans Gear Up For A Taste Of "Lucky You" April 8, 2020
WAZI? FM Is Controversial and Thought-Provoking April 7, 2020
Behold The Dreamers Is Compelling, Passionate and Brutal In All The Right Places April 2, 2020
The Truth (Finally) Reveals Herself: A Critique April 1, 2020
tags
AWARENESS
MENTALHEALTH