I'd known Sylvia for a couple of days before I found out that she is an artist. But, in all honesty, this came as no surprise. Sylvia seems to have a knack for self-expression. Incredibly stylish and not at all shy, her demeanor tells you that there is something more to her than a pretty face and a well put-together outfit. Fast forward to her BLCK GRL PWR exhibition and it all fell into place. The pieces capture the essence of strong black women who have somehow been able to maintain a certain softness, perhaps, something Sylvia sees in herself (as we all do). I had a chat with the homegrown talent on BLCK GRL PWR and the inspiration behind it. 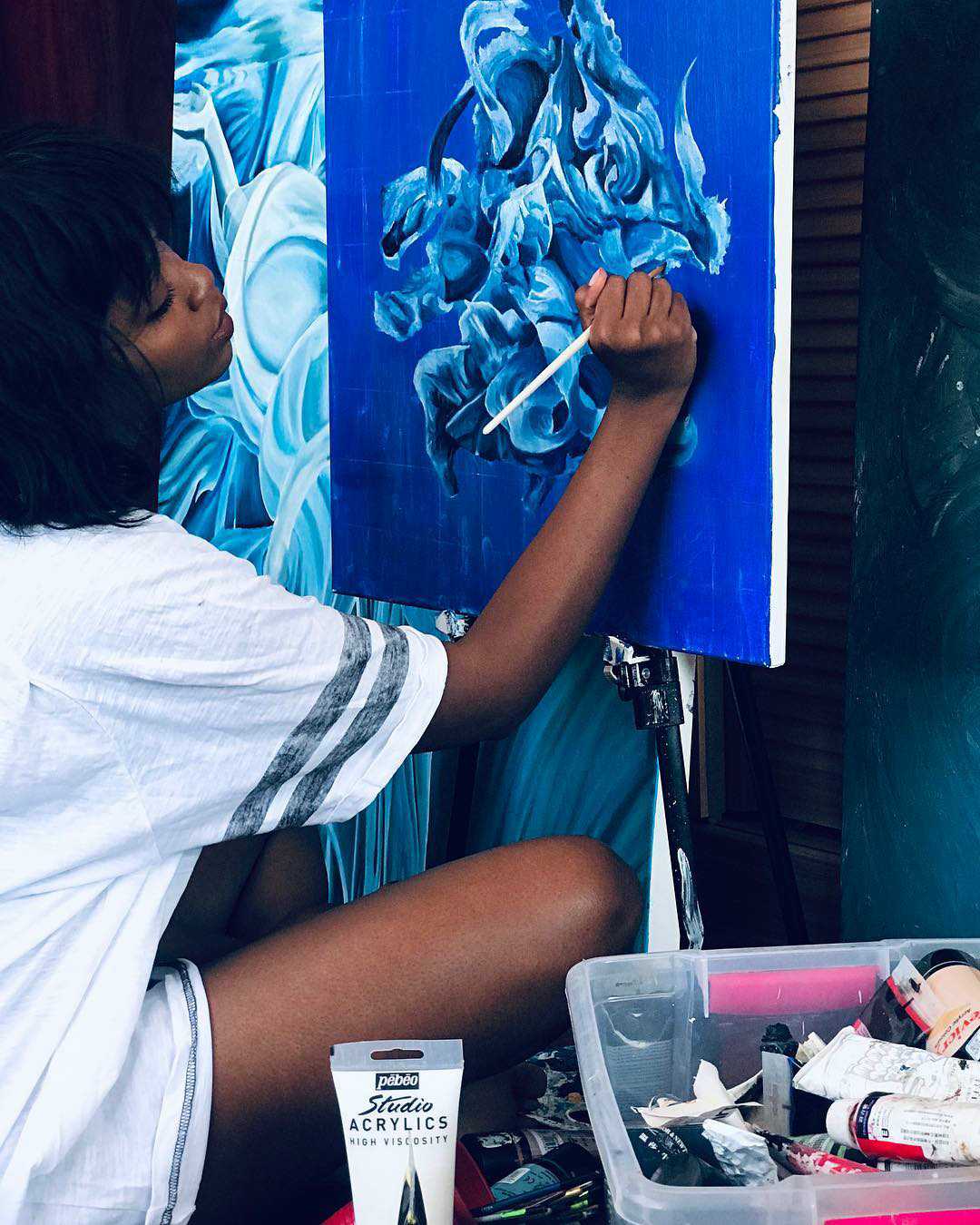 Mookh: What was the beginning of your journey as an artist?

Sylvia: I started drawing when I was about 10 years old. That's when I fell in love with art. My parents got into some money and they took me to Brookehouse, but, we lived all the way on Thika Road. Because of that, I had a lot of extra time. I'd be waking up at 4 a.m. only to get to school at 7 a.m. and classes started at 8.30 a.m. and in the evenings my dad would pick me up at around 6 or 7 p.m. The art teacher kinda felt bad for me so she took me in and that's how I started drawing. I didn't realize how much I would love it.

Sylvia: I am self-taught. I did a bit of art in high school but I mostly taught myself off of YouTube. I used to watch 2 hour videos. 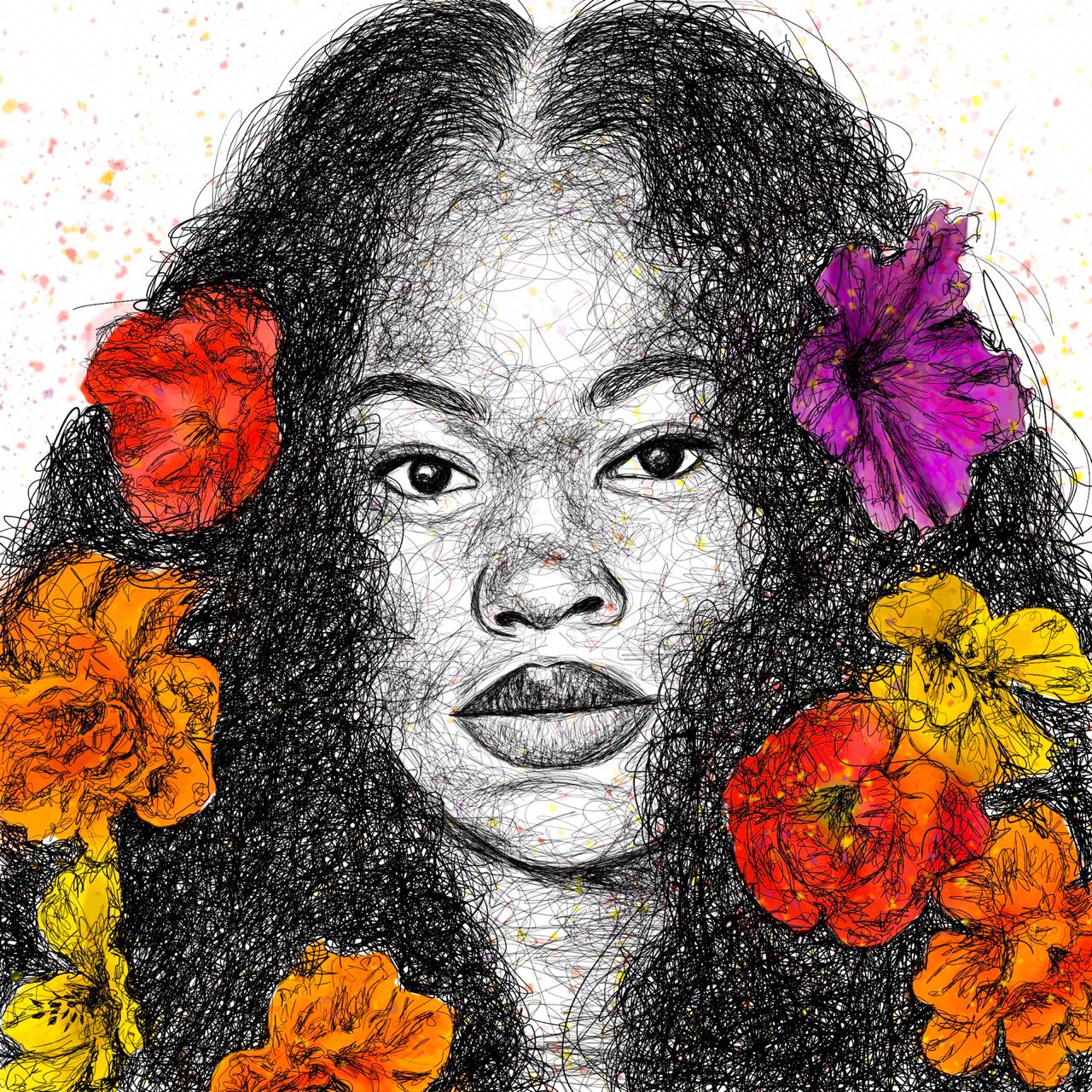 Mookh: Your latest collection is in the form of digital art. Are you purely a digital artist?

Sylvia: No. The digital art started cause I started working and still needed to be creative. So I'm not purely that, the digital art just came about with the circumstance and the fact that I still wanted to continue creating. I love traditional art.

Mookh: Tell us about Black Girl Power what was the inspiration behind this project?

Sylvia: It's bigger than just the exhibition. I want to start a campaign; a proper movement around it. For the exhibition, the aim was to show that there are so many different types of women, so many personalities and characteristics that even one woman can have. I did different paintings based on the different characteristics and personalities that I've met so far, including myself. Some of them looked like a slay queen but you don't know if she's just a slay queen; she could be a doctor but she loves dressing up. There's one of a sex worker as well. I just wanted to bring out that women are not just the surface, we have so much to deal with. 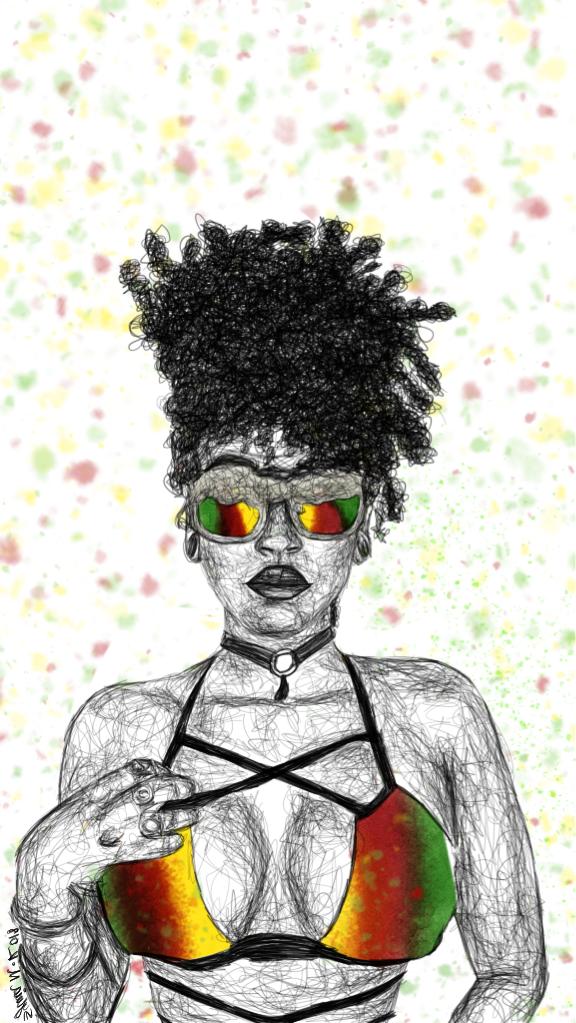 Mookh: Looking at the pieces, I see an emphasis on the black woman owning her sexuality. Why was this an important message for you to relay?

Sylvia: Not particularly. I think over time we have come to accept how sexual women can be. For the gold Egyptian modern woman, I wanted to draw an Egyptian queen but a very modern version of an Egyptian queen. I wanted it to be an embodiment of an African modern woman. Where, yes we accept sexuality but her poses were also very soft and feminine and her attire and jewellery were just meant to embody the modern African woman would look like. There were elements of sexuality but it wasn't intentional. I didn't want to focus too much on sexuality because, yes, as human beings we're very sexual but I wanted to focus on the underlying aspects of a woman. 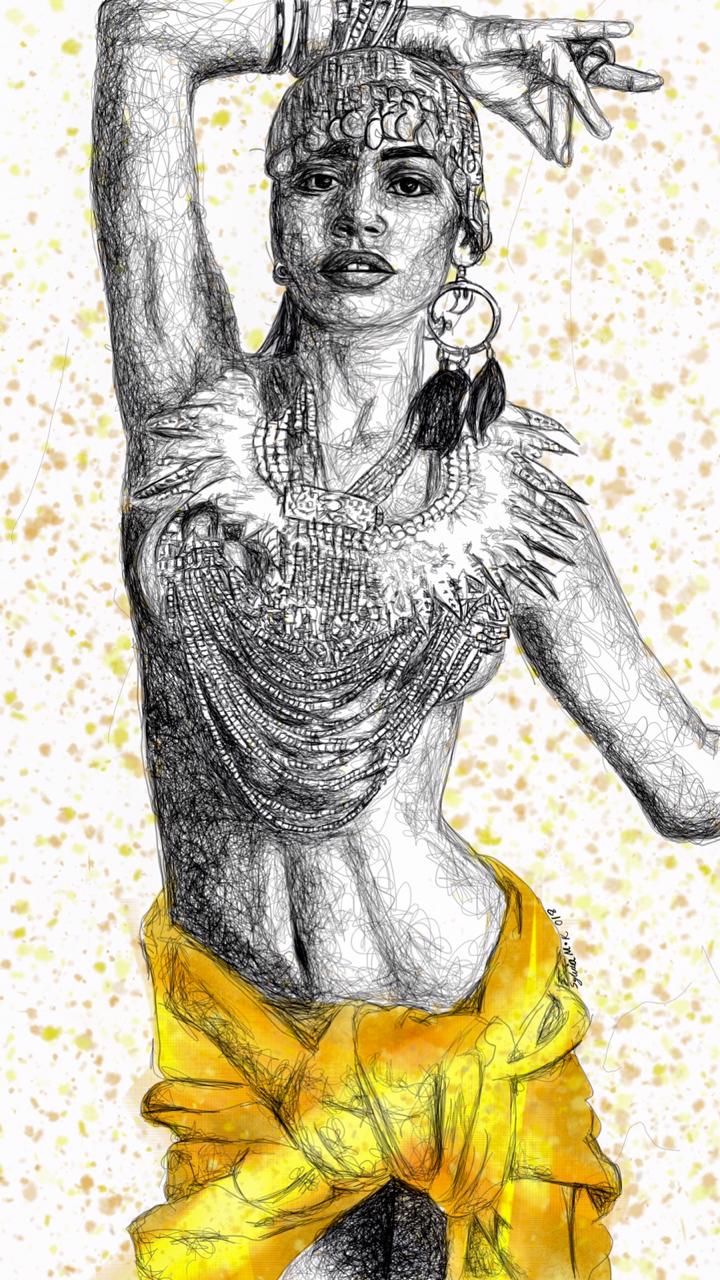 Mookh: What’s crazy is you did these all on your phone! Walk us through that.

Sylvia: It was kind of challenging. I had to buy the phone and I wasn't working then so it took me about 8 months to come up with the money for an iPhone, which was very expensive. That was hard at that point. Also, figuring out the style was difficult. I tried out a lot of styles before I landed on this one. The only easy part was the fact that I could still walk around and create. I would be in my car, in traffic and just start drawing. If I had a short break at work then I could draw as well. 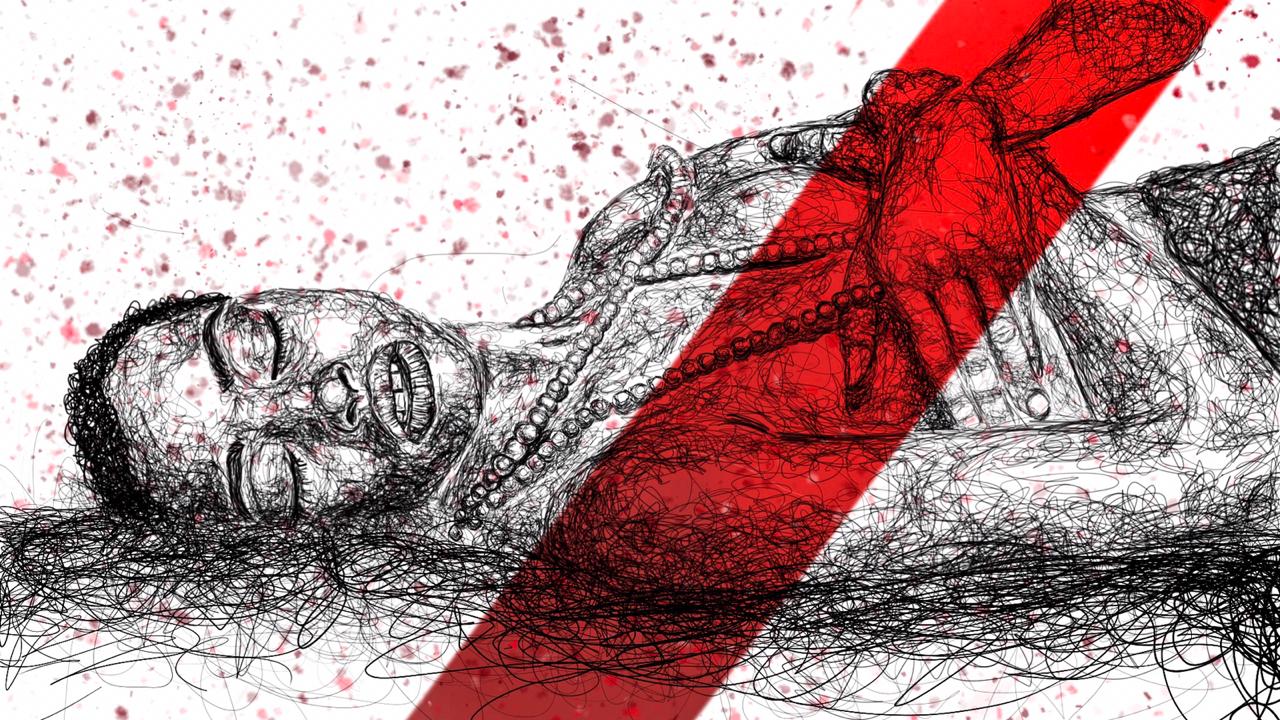 Mookh: I noticed the juxtaposition of color and monochrome elements on each of the pieces. Was this intentional?

Sylvia: I used elements of traditional techniques with the pen drawing and the watercolor technique. The black and white really stands out because I wanted to show women can be strong and powerful. The color was meant to tone it down and bring out the femininity and softness. There was one where I used bold colors but that was because the woman in the drawing was asleep so there was already a soft feel to it. To wake her up, I used the bold red. 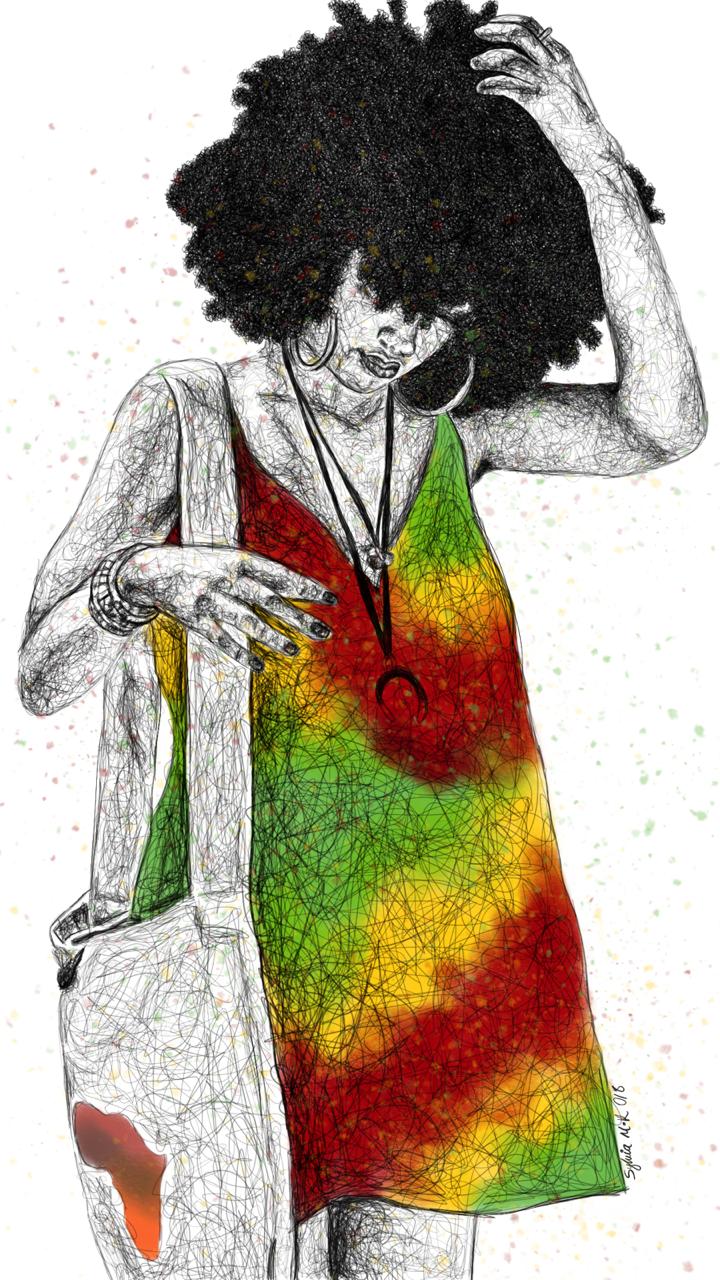 Mookh: Any projects in the works we can look out for?

Sylvia: I'm already working on the BLCK GRL PWR Campaign and I'm starting by focusing on Kenyan women and how they successful can be. There are so may single mothers out there who feel they can't do what they want because they already have so much responsibility. I want to show our generation and the younger generation that you're capable of doing anything you want. Look at Karun being in Forbes top 30 under 30, Lupita Nyong'o winning an Oscar and so many more. It's going to be a digital platform where I feature different women, in different layouts and colors. It will be focused on the visuals and have very little writing but I will include links to their platforms and what they do. 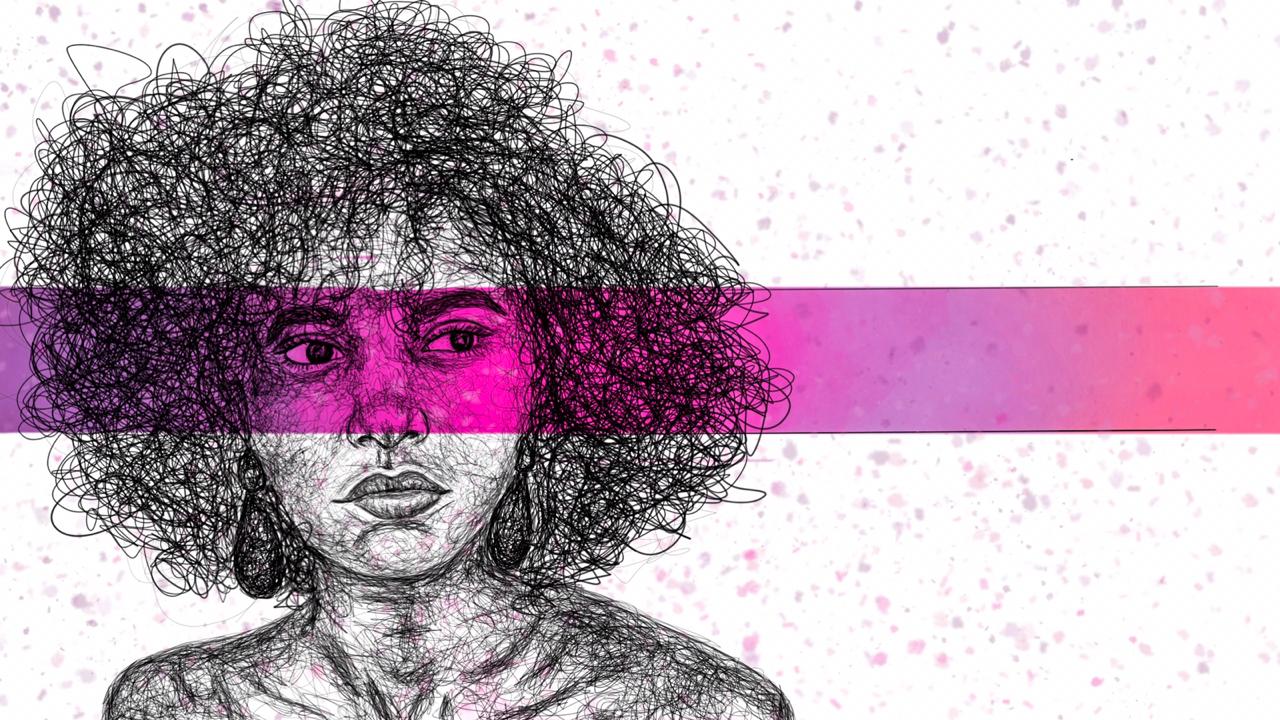 Follow Us
Categories
Latest Content
All Eyes On Nyashinski As Fans Gear Up For A Taste Of "Lucky You" April 8, 2020
WAZI? FM Is Controversial and Thought-Provoking April 7, 2020
Behold The Dreamers Is Compelling, Passionate and Brutal In All The Right Places April 2, 2020
The Truth (Finally) Reveals Herself: A Critique April 1, 2020
tags
DIGITALART
BLACKGIRLPOWER
ARTIST